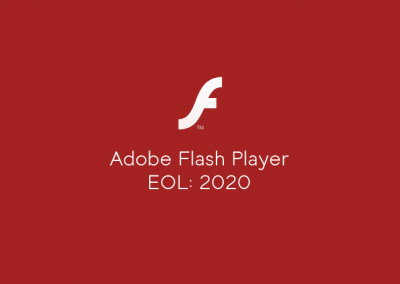 The company took the decision that all the developer and user ecosystem was waiting for years. Flash Player has been riddled with security bugs in the past decade, and it’s been the favorite target of malvertising and cyber-espionage campaigns for years.

Adobe says that open standards like HTML5, WebGL, and WebAssembly have matured enough over the past years to provide suitable replacements for all of Flash’s features, such as 3D graphics, live streaming, and complex animation sequences.

Both the live streaming and the browser-based gaming scene has been massively moved away from Flash in the past five years.

Adobe didn’t provide an exact date when it will stop updating and distributing Flash in 2020, but more details will surface as the EOL date gets closer.

Most of today’s browsers ship with Flash pre-installed, but the plugin is disabled by default. Browsers like Chrome, Edge, or Firefox have started using an HTML5-by-default policy, as well as most online content providers.

Adobe has been preparing for this step for the past few years, as it focused most of its developers in creating HTML5-centric tools, such as Animate CC. In addition, other Adobe apps that previously supported “Export to Flash” features, now come with “Export to HTML5” options instead.

While many — including us — have bashed Adobe and Flash for its poor security, we all agree that the web couldn’t have reached the point it’s at now without it.

Catalin Cimpanu is the Security News Editor for Bleeping Computer, where he covers topics such as malware, breaches, vulnerabilities, exploits, hacking news, the Dark Web, and a few more. Catalin previously covered Web & Security news for Softpedia between May 2015 and October 2016. The easiest way to reach Catalin is via his XMPP/Jabber address at campuscodi@xmpp.is. For other contact methods, please visit Catalin’s author page.