Browser Autofill Profiles Can Be Abused for Phishing Attacks

Browser Autofill Profiles Can Be Abused for Phishing Attacks

Browser autofill profiles are a reliable phishing vector that allow attackers to collect information from users via hidden or invisible fields, which the browser automatically fills with preset personal information and which the user unknowingly sends to the attacker when he submits a form.

Autofill profiles are a recent addition to modern-day browsers. This feature works by allowing the user to create a profile that holds different details about himself that he usually enters inside web forms.

When the user has to fill in a form in the future, he can simply select an autofill profile and his browser will enter the preset information in all form fields, sparing the user the time he would have needed to type in 10, 20 or more fields.

Finnish web developer Viljami Kuosmanen has published yesterday a demo on GitHub that shows how an attacker could take advantage of browsers that support autofill profiles.

His demo, available here, is a simple web form. A user looking at this page will only see a Name and Email input field, along with a Submit button.

If the user has an autofill profile set up in his browser, if he decides to autofill the two visible fields, the six hidden fields will be filled in as well, since they’re part of the same form, even if invisible to the user’s eye. These can be hidden or simply moved outside the user’s screen.

As you can imagine yourself, this presents a simple method that threat actors can use to collect all sorts of personal information about users, ranging from home addresses to phone numbers, and even credit card information, if the user saves this type of data in his autofill profile.

“I had known about this issue for a long time,” Kuosmanen told Bleeping Computer today via email. “A similar thing (honeypots) is used to trap bots in forms to avoid spam. This is the same idea, just trap real browser users instead of bots.”

“The idea for the demo came after I was annoyed about Chrome autofilling wrong fields on an ecommerce site. I then went on to see which details Chrome had saved for autofill about me and was surprised about how much information is available,” Kuosmanen added.

Intrigued by Chrome’s behavior, the developer says that he then experimented to see what was the range of form fields Chrome would fill in, and he eventually got the idea of testing hidden form fields.

“I thought it would be a good idea to demonstrate this issue as a gif and shared it on Twitter,” Kuosmanen said.

During his tests, the developer discovered that Chrome had UI elements in place when a username or password was filled in, even inside a hidden field, but these didn’t appear for the other fields.

Kuosmanen says he only tested Chrome and Safari, and that both browsers autofilled hidden fields. “Safari did a better job telling the user what information it was autofilling but still did fill the hidden fields,” he says.

According to our tests, the only browsers that support autofill profiles are Google Chrome, Safari, and Opera.

Browsers like Edge, Vivaldi, and Firefox don’t support this feature, but Mozilla is currently working on it. 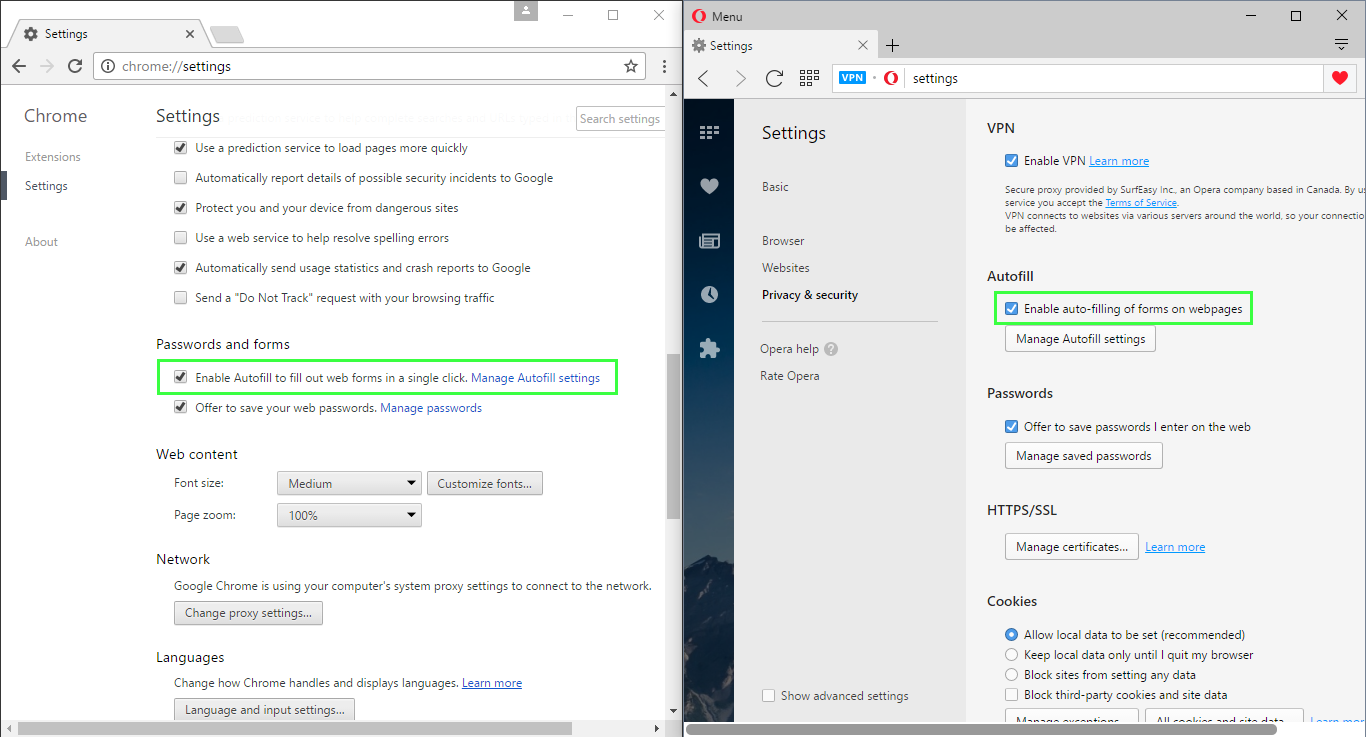 On the side of browser vendors, the best solution to negate this attack vector would be to disable autofill behavior for hidden form fields.