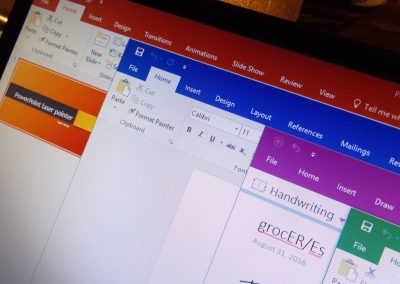 Which version of Microsoft Office is best for me?

Office 365 and Office 2016 share a lot of similarities, yet deciding between the two involves a lot of factors.

Office 365 is a subscription-based service that currently uses Office 2016 apps, but when the next version of Office is released, users will get that as part of their subscription.

Office 2016 is a buy-once app suite that brings you the Office 2016 apps as they are, without any available updates in the future. If you want to upgrade to the latest version of Office without paying for a subscription, you’ll have to pay full price for the new version — there’s no discounted upgrade option.

The monthly subscription plan is therefore better for students who only need Office for a few months out of the year, whereas a yearly subscription is great for anyone working from home.

An Office 365 subscription ensures you’ll always have the latest version of Office. But you can pay more once and own Office 2016 forever.

Office 2016 is a classic, buy-once sort of deal. This is better for those of you who want to purchase an item once and have it forever. If you only want Word, Excel, PowerPoint, and OneNote, Office Home & Student 2016 is worth looking at.

If you want the full suite of Office apps, you have to go with either Office 365 or Office Professional 2016. As you can see in the table above, buying an Office Professional 2016 plan, which has the same apps as Office 365, but doesn’t have the same cloud storage or multiple device functionality, will set you back about $400. For the same apps, 1TB of storage, and the ability to install the apps on a PC, a tablet, and a phone, you’re only paying about $70 for a year with Office 365 Personal.

Bottom-line: If you can’t be bothered with subscriptions, and you want to buy one version of Office and stick with it for several years without receiving anything other than security and bug updates, go with Office 2016.

If you want to always have the latest version of Office apps with all the latest features, and you don’t mind paying a subscription fee, Office 365 is your go-to option. One of the greatest aspects of Office 365 is the ability to use it on multiple devices. If you have a household of people who all use different operating systems and devices, you have to go with Office 365 Home. You can install Office on up to five PCs or Macs, five tablets, and five phones.

Office 365 Personal limits you to one install on each kind of device, but you can still have it on one PC or Mac, tablet, and phone at once.

All versions of Office 2016 can only be installed on one PC. This means that if you have a few PCs in your home you want to install Office on, you’ll have to purchase separate products — this can really add up.

Keep in mind that all Windows 10 Mobile users have access to a suite of free Office apps known as Office for Mobile on their phones and tablets, regardless of whether or not they’ve ever purchased a version of Office in the past. The Office 365 mobile apps do have more features than these free apps, so if you’re someone who does a lot of work from a phone or tablet, you’ll probably want to spring for a subscription.

Bottom-line: If you’re someone who loves working on multiple devices, or if you want Office installed on several devices, you’ll want to go with Office 365.

If you only have one PC and don’t plan on expanding, however, Office 2016 might be just what you’re looking for.

Although Office 365 is subscription-based, after the initial download and install, you don’t need to be connected to the internet to use the Office apps. You do, however, need to be connected if you want to save files to OneDrive, unless you sync your files to your desktop using the OneDrive app. In that case you can save to your OneDrive while offline, and things will sync whenever you next connect to the internet.

Office 365 requires you to connect to the internet and sign in every 39 days to keep full function of the Office apps.

There is a hitch: if you don’t connect to the internet and sign into Office 365 at least once every 39 days, your apps will be limited read-only mode and you’ll probably receive warnings that your product is unlicensed.

Office 2016 doesn’t require you to connect to the internet at any point following the initial download and install registration, though you’ll still have to hop online to download the regularly released security update.

Bottom-line: If you’re living without a regular internet connection, then you might want to opt for Office 2016. But the odds are good you’ll need to get online at some point for something at some point.

Any technical issues you experience with Office 365 will be handled promptly by Microsoft support staff. You can also inquire about any subscription and billing issues you run into.

Office 2016 only offers tech support for any initial installation problems you come across. After installing Office 2016, you’re basically on your own as far as official tech support goes.

Bottom-line: If you love the added safety net of constant tech support standing by, there’s only one choice: Office 365.

If you can handle things on your own following installation, you’ll probably be alright going with Office 2016.

Office 365 users get a whopping 1TB of OneDrive storage with their subscription.

Office 2016 does not include any cloud storage. You can get ahold of a 50GB OneDrive plan separately, but it will cost you about $2 a month. A 5GB OneDrive storage plan is free.

Bottom-line: If you’re keen on cloud storage to hold all your Office documents and whatever else you choose, you have to go with Office 365. The included 1TB of storage is an amazing deal on its own, nevermind the full suite of Office apps you get with it.

After reviewing the differences between Office 365 and Office 2016, it’s clear that Microsoft is pushing users towards Office 365. The included 1TB of OneDrive storage is a great deal, you get access to all Office apps no matter which version you choose, and you receive ongoing updates to ensure you’re getting the best Office experience possible.

Microsoft hasn’t completely killed the buy-once model, and those of you who absolutely hate subscription fees still have something to be thankful for. It’ll cost a lot upfront to get the full suite of apps, but if you’re looking to buy Office once and stick with it for a few years, the price doesn’t seem as bad.